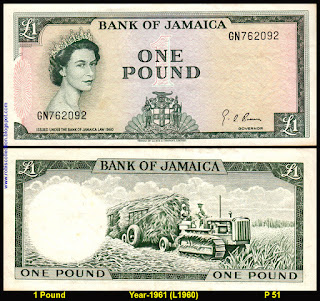 Email ThisBlogThis!Share to TwitterShare to FacebookShare to Pinterest
Labels: JAMAICA-BRITISH 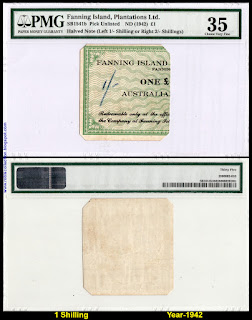 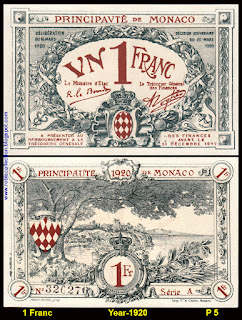 Email ThisBlogThis!Share to TwitterShare to FacebookShare to Pinterest
Labels: MONACO 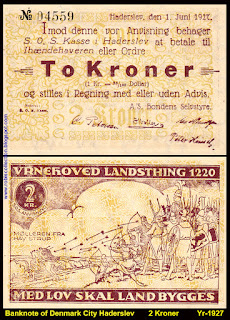 Haderslev is a town in Denmark located near Germany. Unhappy with the traditional political parties and reinforced by an agricultural crises in 1926. Haderslev declared itself an independent "Self Government of the Farm". The purpose was to establish a "new state modeled after ancient Frisian traditions". In order to help finance the new government, Haderslav issued banknotes dated June 1, 1927. They were denominated in Kroner but tied to the U.S. dollar. The inscriptions on the notes indicate "1 Kr. = 26/100 Dollar". The notes bear the facsimile signatures of the founders of the movement.  The movement fell apart about a year later. This brown 2 Kroner note of Haderslev has inscriptions on the front. The back depicts archers shooting at a fleeing horseman, a design that was used on a 1920 Haderslev notgeld note. It is approximately 110x73mm.  It is a scarce and historic banknote from a failed "new model state".

Email ThisBlogThis!Share to TwitterShare to FacebookShare to Pinterest
Labels: HADERSLEV (CITY OF DENMARK) 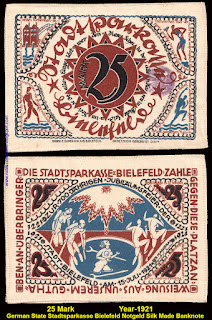 One of the most unusual pieces of notgeld issued in Germany following World War I is the silk money of Bielefeld. The Stadtsparkasse Bielefeld, which was the city owned Savings Bank of Bielefeld, issued this 25 Mark note to commemorate the 700th anniversary of the founding of the city.  The note, dated July 15, 1921, was made with two pieces of printed silk sewn together.

Robiul Islam
Hello, My nick name is Robi and I am from Bangladesh. I am a collector of Coin & Bank Note and started to collect since 1995. Bi-Metal, Unusual, British India Coin and Polymer Bank Note are my favorite items. Images of coins and Bank Notes have been taken from my own collection. At first I am very grateful to Almighty Allah for giving me dedication, energy to fulfill my hobby. Also grateful to some persons who are helping me to increase my collection. My family members, relatives, friends, colleagues, Iftekhar Bhai, Shamsuddin Bhai, Dulal Bhai, Jewel Bhai help me very much to increase my collection. Special thanks to Tuhin Bhai (Salam Stamp Centre) who helps me to enrich my collection. Shakil Bhai, A Great Man, who inspire me and create this website to flourish my collection worldwide.